We are “Pro Russia?” 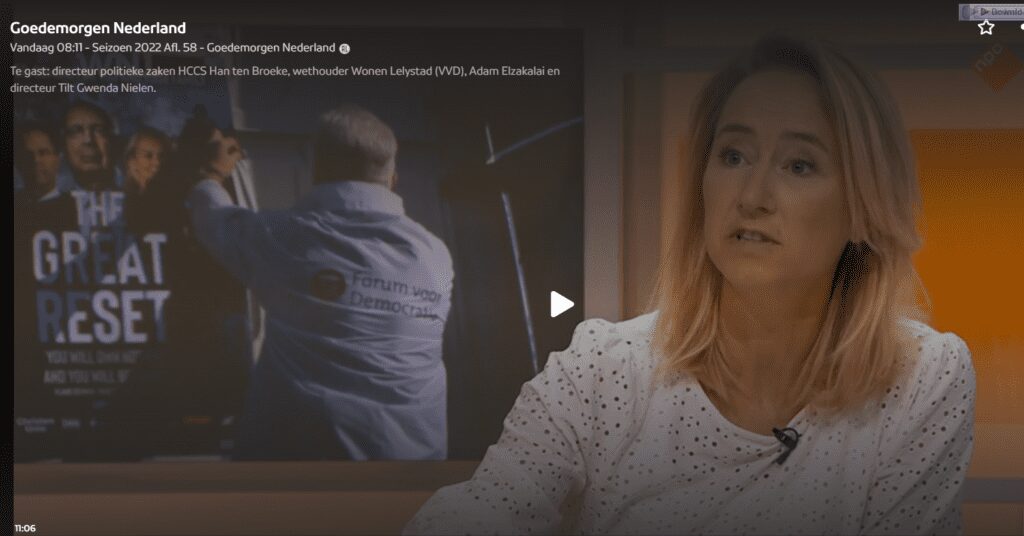 Gwenda Nielen from Good morning Netherlands. A danger to the sheep.

If you wake up today, you will receive another message from someone who has watched the terrible Good Morning Netherlands.

Thank you, my blood boiled immediately when I saw the fragment and so this story is the result.

Of course we are not necessarily Pro Russia. But not pro EU either! You are ashamed to death.

This war will fizzle out if the EU and Biden don't flex their muscles.

Zelensky on his knees and Putin gets his territory. But no. This should be made into a Third World War.

It is unbelievable how short-sighted and how childish the media talks about corona critics who are now all of a sudden “pro Russia” would be now that there is war in Ukraine.

This is my story and this is how I think most readers of websites like this one broadly think about the Russia-Ukraine conflict. I am aware that there are readers who know a lot more about the situation there and why it arose. It's more complicated than described.

Broadly speaking, Russian-speaking Ukrainians have been terrorized for years. Putin called it genocide several times and he wants that territory.

If the media and America continue like this, this will become a global conflict that no one wants. China will be involvedn and then we actually go towards a Third World War with countries that all have nuclear weapons. Something we are not waiting for.

We who are trying to see beyond our noses are the “underground pro-Russian extremists.”

I think few people know exactly what the situation is and what Putin's motives were for invading corrupt Ukraine. But maybe it's not our package either.

As a media you should highlight both sides and that is not happening. It's disgusting and dangerous.

the all-knowing Gwenda Nielen claims in the fragment below that the corona critics are now also falling for the propaganda of Russian media. Condemning propaganda with propaganda.

What a cold. Like we're idiots that do not understand. We seek the truth. And it is difficult to find, but the crazy story of the Western media is not correct on all sides and is dangerous.

This is a war we should have nothing to do with.

Right now there are so many wars in the world that no one is looking at. Ethiopia. Afghanistan, Congo, Yemen, Myanmar, Nigeria, Somalia, Syria, Venezuela, Sudan. (source)  Just to name a few. We're not talking about those massacred civilians. Look away. But this war is widely reported and suddenly everything is anti-Putin, while we are only hearing one side of the story. And in a childish way too

“Yes but we have to help the citizens of Ukraine…”

Yes, if you can, of course. But a death in Ukraine is just as bad as a death in Yemen. We cannot help everything and everyone. In the meantime, Rutte has just made a law whereby you may have to give up your property temporarily for the refugees from the Ukraine.
https://zoek.officielebekendmakingen.nl/stb-2022-133.html

Don't be talked about. That's how it works in a democracy like the Netherlands.

Although, speaking of a better world, it could be, but people in this world are not interested in Yemen or Ethiopia.

Why can't the masses see through that political correctness?

Why is it not seen? Emo blackmail!

Suddenly America stands at the door of Russia. Without declaring it, Biden has declared war on Russia.

Russians have been killed by Americans. What is he up to? The man is provoking a Third World War.

This while the immigration crisis in America is a very big problem and a great danger for the country America. Biden should be concerned with that.

But Biden isn't concerned about that. The totally insane man with trouble holding back his anger leaves the boundaries open.

You see the most terrible things there, caused by criminal ruthless people smugglers who do everything to squeeze the refugees and rape the young girls.

They owe a debt to the people smugglers and this will cause a huge wave of crime and chaos across the country. The refugees think they are in the promised land, but the truth is different.

We know about Biden's deals and we also know that Biden is always acting out of self-interest. Whether that results in a Third World War or not, he doesn't care.

In the last phase of his life, he is about to go to war with countries with nuclear weapons.

Wasn't it said back then that crazy Trump shouldn't be at the controls of nuclear weapons? People crave Donald Trump.

When you know the story, and I'm going to caption a Tucker Carlson broadcast, you don't understand that even a rat like Biden doesn't do anything about this at all, but wants to go to war with Russia.

Ukraine is a thoroughly corrupt country.

The citizens can't do anything about that. It's just like that at the moment. The country's Russian-speaking population has been heavily terrorized for years.

Will the whole world suddenly have to be turned upside down because of a war in Ukraine?

What the hell is America doing there? And we? The so-called European Union? A Union of which a large part of the population, even if the media gives a different picture, is ashamed of it?

There would be no European army. (source)

Less than a week later we hear that everything is being done to form a European army. (source)

But Rutte put it aside. “Thank you for your advice, Dutch citizens, but we will allow Ukraine anyway.” And the referendum was quickly abolished afterwards,

And why did the Dutch people not want Ukraine to join? As mentioned, because it is a thoroughly corrupt country with a government that has been shooting, bombing and terrorizing its own citizens since 2016.

And now we see the result.

Russian-speaking Ukrainians in the east of the country have been shelled and bombed for years.

Anne Bonnell of CNEWS: Ukrainians are bombing their own citizens
Anne-Laure Bonell is a French war reporter for the French 24-hour news channel CNEWS. Last week she was broadcast live on CNEWS and spoke about her experiences in Ukraine, where she has been staying since 2015. She says this has been going on since 2014 and the Ukrainian government has been going since 2014

Putin has been warning for years that this is beginning to look like a genocide of Russian-speaking people.

There has come a time when Putin probably thought it was enough and wants to protect the Russian-speaking citizens. That seems to me to be a valid reason, although I think it is terrible what is happening.

Does that mean it's okay for him to invade the country? No, I don't think most are for that. Nobody wants violence.

But both Europe and the US have no business here. This is an issue that the rest of the world should not get involved in because it will only get worse.

I think that's the view of many, broadly speaking. Of course everyone has their own opinion and may understand more about the situation in Ukraine.

But listen to what people are saying today in Good Morning Netherlands about people who broadly think like us,

This morning in Good morning Netherlands, abject and incorrect conclusions were drawn about critical.

Somehow they managed that if you record the broadcast with a screen recorder, the picture remains black. We'll have to find something about that. Nothing is impossible.

But in the background is a photo of the Forum for Democracy at the time talking about underground “neo Nazis and other radicalized groups and antivaxxers.”

Listen to this cringe-inducing fragment from this morning from Goedemorgen Nederland.

With a photo in the background of the Forum for Democracy, as mentioned. The fragment comes from today's broadcast around 08:22.

It's very cringe-inducing. And so this is what the "ordinary person" hears daily from our one-sided media that are on the warpath but turn so that people who are critical belong to some kind of extreme right-wing group.

Listen to this monstrosity. Not having a clue of what is going on in the world. It is really insane that this can be broadcast on Dutch TV. No content from the other side.

The introduction. “Sceptics who questioned the pandemic now seem to be focusing on the war in Ukraine.”

Which pandemic? Can you prove that to me in the figures?

And then comes the analysis of “Disinformation expert Tilt” Gwenda Nielen.

Gwenda, have you ever looked into The Great Reset? Do you know what it actually means?
Gwenda, why are critics who have a different view of reality than yours not allowed to speak freely and have a debate about this situation?

Who are you to determine what disinformation is? Do you ever look at the real images? Yes, many images circulating on Twitter are fake. We're not crazy. What do you see us for? What are you thinking?

It is in and in sad. And then there's that photo of Forum for Democracy in the background. Disgusting. 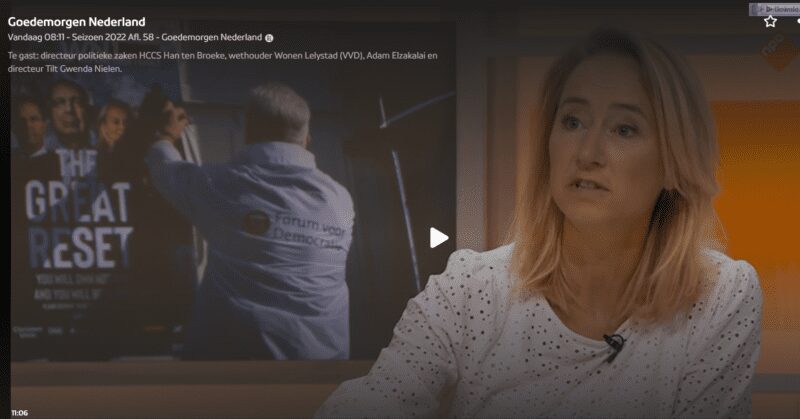 But we're certainly not Pro EU or Pro America right now. I think this conflict will be over as soon as Putin gets back Russian territory so that those people can live normally there. And YES Mrs Gwenda. There is a lot of fake information about the victims. Don't pretend you're actually doing research because you're not.

And what we want to show is the other side of the story. Where do you get the nerve to think that the West is "the good guys" right now, Gwenda Nielen?

Where do you get the guts to criticize certain critics neo nazis en anti vaxxers to name? What kind of an idiot woman are you? You never get out of the studio and when you visit those Telegram groups you don't look at the content. All you read is what you want to read. Pro Russia. Anti-vaxxers. No further content.

Hardly anyone has anything against vaccines, but these are not vaccines. What rock have you been living under, Gwenda? Do you have it WOP report read? After 3 pages you will fall off your chair. And then spout this unsubstantiated nonsense?

And where does Good Morning Netherlands get the guts to show a photo of the Forum for Democracy in the background at exactly that moment?

Of course we do not pretend here that we are proclaiming the truth and nothing but the truth, But platforms such as CommonSenseTV, but especially other platforms such as De Andere Krant and many others that do really top work, are at least looking for the truth.

Something the media can suck at.

I was once proud to be a Dutchman. But our politicians and our media have taken that pride away from me. If only I were Hungarian. There is still some common sense there.

I spoke in the we form because I know there is a group of people who think the same. Other insights are most welcome in the comments.

So this is what we're afraid of. A real proxy war in which Dutch soldiers are of course also involved. We are against war and want NL to declare neutrality. https://t.co/f5VgzE3Gow

Free Spirits Community Netherlands | The Other Newspaper Podcast #29 https://www.youtube.com/watch?v=9AFjk-4pNzk Today In The Other…

The US legal system still functions

Daniël Pardoen party leader FvD Purmerend: “We have to stand up!”

wpDiscuz
18
0
I'd love to know what you think about this. Please leave a comment.x
()
x
| Reply