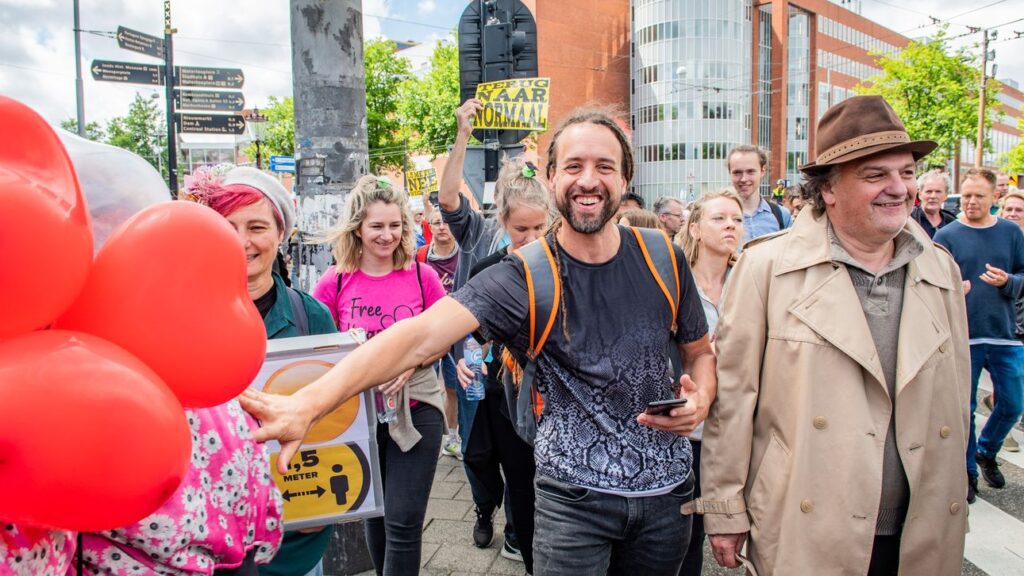 How dissenters are silenced is insane. That there are people who encourage this is even more insane. Hordes of people cheer while not seeking out any counter-arguments and judging for truth.

Willem Engel was arrested this morning. On the street just after he cast his vote for the Municipal elections, The cowardice of the arrest is expressed by the police officers. They partly covered their faces with a cloth.

Welcome to the police state of the Netherlands. If people understand the system, they will be locked up. #freeWillem #demonstration #police station #marconiplein pic.twitter.com/SEjJr4brcv

The Public Prosecution Service does not want to confirm the identity of the arrested man, but lawyer Jeroen Pols from Viruswaarheid confirms that it concerns Engel. “It's true, it was coming when you criticize the corona policy. Plus all the negative publicity in the media. We counted 440 articles that are negative about Willem Engel. It would be nice if people pay attention to what is going on. What else can we do? He is stuck. I think they will hold him until the March 30 trial.”

On March 30, a lawsuit is planned against Willem Engel before the police judge.

The declaration followed after a collective declaration was made by more than 22.500 people. Initiator Norbert Dikkeboom. Just write the name down. Also one who will later say: “Yes, but I was also in the resistance!”

dikboom to the AD: “,,It makes me positive that the law is once used against Engel and that he is called to account. There are many people in the Netherlands where he gets the blood from under the nails. People who can no longer do their work safely. It is good that there are now reliable authorities that are going to investigate his actions.”

There are a lot of people who get the blood under my nails, but they have the right to do so. I'm not going to report that.

Isn't someone who drives more than 25.000 people crazy to file a report against someone without actually knowing what matter they are talking about? Like this initiator Dikkeboom?

Have some guts and have a one-on-one conversation with Willem Engel. But we know how it ends. Such a figure screams and screams because of a lack of knowledge and awareness of what is actually going on in the world. These people actually live in a very small world and love this attention.

He describes the Virus Truth founder as 'an extremely disruptive factor in the debate about the corona crisis and the associated measures', he says to the AD (or writes the AD).

Debate?? Which debate? There was never a debate? Anyone with a different opinion was silenced. Anyone who asked the most obvious questions, which a child would even ask directly, was banned and ridiculed. And if you continue to argue, you will be a target of the authorities.

But this kind of scum is going to pay. Because every day thousands of people come in, truth in hand, who are willing to fight for that truth. And then I'm only talking about the Netherlands.

You can bet that a good number of politicians and other scum no longer sleep so well at night due to global developments. The fairy tale comes crashing down and the puppets like Rutte and all the scum underneath are held responsible. That's how you sell your soul to the Devil and underestimate the power of truth.

Shall we file a complaint with tens of thousands of people against those who DEMONSTRATELY, very easily demonstrably even, have blood on their hands? Real human blood from thousands of people? And that is an understatement when you sit down and list all the consequences of this policy. There's no end to it.

This is the coronareligious man with an obsession against everyone who speaks with common sense but especially Willem Engel. No more capital letters for this man. Capital letters still show some respect. Not for this kind of left-wing figures. big tree. Already noted in many lists as co-responsible. I think they only partly realize what they are doing and they are mainly concerned with their image now that they think they are in the positive spotlight.

These are not people. These are not men you can sit around the table with and exchange points of view. These are weak, false, money and attention-hungry figures who pose a danger to society by defending Evil and drawing ignorant followers along.

Meanwhile, the people who tell just too many truths continue to be harassed and that goes from bad to worse.

It seems that anyone who takes the initiative to do something against this lying government with a terror policy where nothing, absolutely nothing is right, is in danger. Bullying, police visits, people ringing your bell at the strangest late hours and short vacations in a cell. One has long since passed all shame and sense of justice.

And believe me, this goes beyond the borders of the Netherlands in the name of the Netherlands. It is too bizarre for words what these people are doing, but worse still, that the majority do not realize it yet.

They are the convulsions of a rotten and corrupt system in which the psychopaths have no longer been able to mask their real face and realize that they have been seen. People want to finish the lockstep booklet, but in practice it is a bit disappointing. Brave citizens were expected to come along to realize their sick worldview.

William, good luck! As I've hinted in a number of comments, I don't know exactly what you're doing because I don't want to mix with others. But I see the lawsuits and I see common sense there being condemned over and over without any substantiation in the most clumsy way by people who represent the state and literally resemble reptiles.

But we're going to slaughter those reptiles.

And for big tree? We'll pick out the thickest tree.

A Serbian Message: So you think you know what oppression is?

Beware of DNA and RNA change.

Most important interview ever with Geert Vanden Bossche

wpDiscuz
13
0
I'd love to know what you think about this. Please leave a comment.x
()
x
| Reply