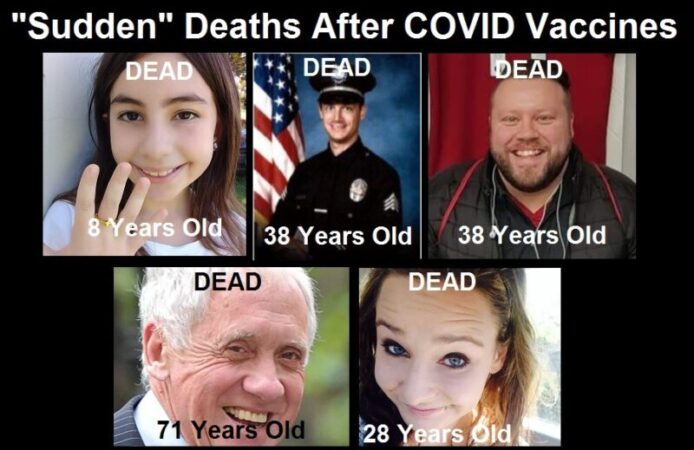 There are new numbers again, ladies and gentlemen. The officially reported victims at EudraVigilance (EU countries) and at VAERS (USA), sick or deceased, due to the various poison syringes that are commonly called covid vaccine. 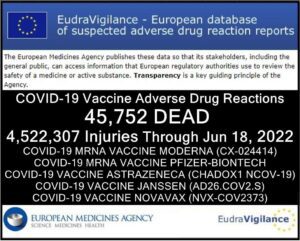 Nearly 46 thousand EU deaths and more than 4,5 million sick/injured, almost half of which are serious to life-threatening, as a result of the poison injections.

Are things getting better in the US? 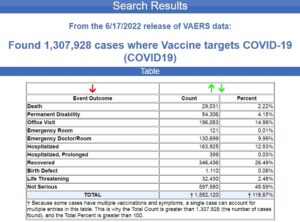 More than 1,5 million reports, including 29 thousand deaths and roughly half a million serious damages.

I have written many times on CSTV that this is a significant underreporting, but it cannot be repeated enough. You can safely multiply the reported numbers by a factor of 10 and then you are still on the cautious side.

But in the Netherlands there is of course nothing wrong!

Statistics Netherlands recently reported that virtually no deaths were caused by the poison syringes. We are faced with an unprecedented excess mortality, not only in the Netherlands, but in all spray-hungry countries. All possible nonsense is suggested to explain this excess mortality. While every sane person first wonders what is currently different in society than in the years before 2021.

And yes, that's the poison syringe. Millions of people report syringe damage, illnesses and deaths, but CBS says nothing is wrong.

How does CBS get there, you may wonder. Well, for every death a death certificate (form B) is completed by a (survey) doctor on which the probable cause of death is noted. In the past, this was done carefully and with certain guidelines. Since the covid hoax, the guidelines no longer apply and covid is mainly noted as the cause of death.

But yes, covid as the cause of death came in handy in 2020. Then the panic would remain in society and they could keep the people down with their terrorist measures.

But in 2021 there was still redemption: The 'vaccine'! Effective and safe! Tested thoroughly!

Much more than usual.

So far they have come up with the following: Sudden Adult Death Syndrome, or, adult sudden death syndrome. And they succeed, as long as the mainstream media dutifully participates in this ruse and deception, they will just get away with it. 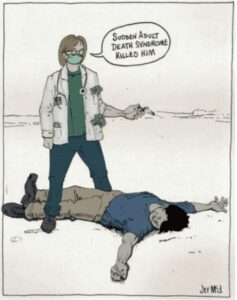 Anyway, back to CBS.

At the time of the excess death, they received virtually no B forms stating that the death was caused by or could be related to the injection.

While those injections are the only difference with previous years. And while the official Pfizer documents, which she wanted to keep secret, show that the syringes cause death and destruction.

How is all this possible? Well, the B form must be completed by a doctor. It should be clear that the vast majority of doctors promote the syringes and in some cases have even injected them personally into a healthy person. If he then dies, the doctor will of course not state that it is due to the syringe. He does look left! And the family is usually not known in what is entered on the B form.

Do you still remember the death of Marcel van Tol's father?

The articles he wrote about this can still be found in the CSTV 1.0 archive:

My father passed away. Another covid dead? Or not? - CommonSenseTV
CommonSenseTV's regular visitors know that I have written regularly about incorrect diagnostics and incorrect records of causes of death.

Been a heart patient for 20 years, died of a heart attack, but the form B said his father had been ill for 4 days from covid-19 and died from it.

Marcel gave it a lot of publicity at the time and it went viral. 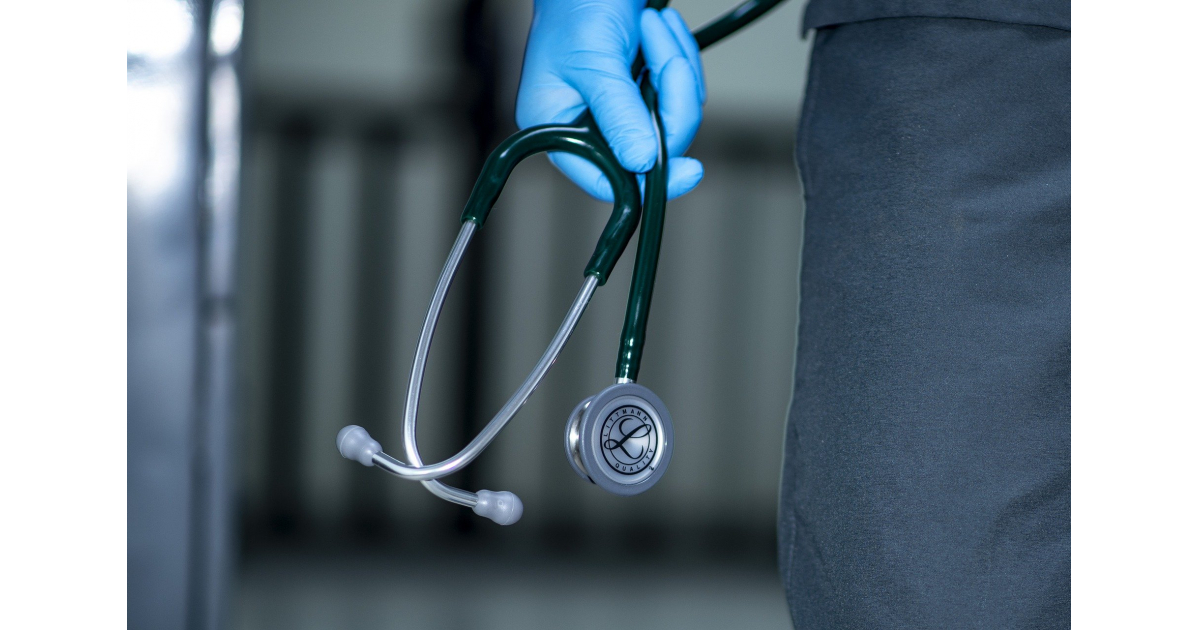 Alphen family doctor accused of giving up the wrong cause of death: “I have acted to the best of my knowledge and belief
This is a message posted a few days ago on the CommonSenseTV website. Marcel van Tol writes there that it is done too easily with the no

Marcel has also filed a complaint with the Disciplinary Court for Healthcare. General practitioner Van Rijn from Alphen aan den Rijn has twisted himself in every possible way to defend his determination. “Act in good conscience” was his mantra.

It has become a huge file, but the final result of the Disciplinary Court is of course that Van Rijn is right. 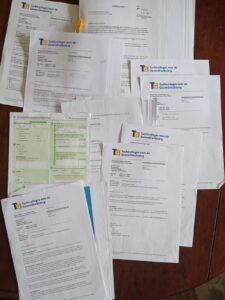 Marcel's immediate family members have all testified to what happened with Van Rijn on the evening of February 14, 2021. But it appears from the file and from the decision of the committee that the determination of the cause of death was not done by Van Rijn at all, but……. by the nurse!

I had to look up what that means, triage officer, but that turns out to be the operator of the emergency room. He had called Van Rijn with the request to make a death determination and the triage officer apparently said that it could be a covid death. Or something. And that is sufficient motive to write that down as the cause of death: 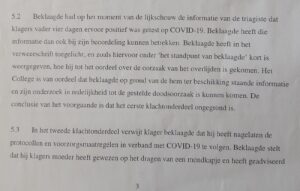 Why did Marcel go to all this trouble, you may wonder.

That elephant is pontifically in the middle of the room, but he is not allowed to be seen or named.

Annoying for them is that hard facts keep coming in that seem to confirm the spray damage. Funeral directors report a huge increase in deaths and insurance companies as well. A few months ago, a relatively small US insurance company, OneAmerica, reported that the death rate among their policyholders was 40% higher than in other years (including the corona year 2020).

But now Lincoln Financial Group, the 5th largest life insurance company in the US, has reported that among their policyholders, ages 18 to 64, there are 163% more deaths than usual. 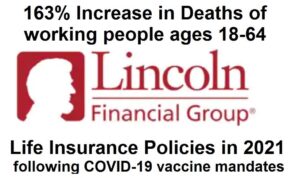 Here's what Lincoln has paid out to the heirs of deceased policyholders between the ages of 18 and 64 in recent years:

It is, of course, unknown how much each individual American has taken out insurance for, but it is estimated that approximately 10.000 more than normal people in this age range have died among Lincoln customers.

Across all age groups, Lincoln paid out more than $2021 billion in 28, 6 billion more than in 2020. It goes without saying that Lincoln is currently suffering heavy losses and if this does not stop, he must fear for his survival.

Dear people, never take such a poison syringe (again). Don't be scared or fooled by the authorities. The syringes will not do you any good but can cause 1.292 different diseases and the syringes can kill you.

If you don't take the syringe you have a 0,2% chance of dying if you become seriously infected by the flu, which is now called covid, but you have 100% protection against all the diseases and death that these injections can cause.

Nearly 75 thousand deaths and nearly 6 million injuries and illnesses were reported. I do know that it is hard for many people to realize that the greatest crimes in the history of mankind are committed here. But you can no longer look away from it. You can no longer believe the bullshit of the rutlers, sales witch, osterhufter and all their companions. In this video you will find a summary of almost one and a half hours of real victims. That is, the victims who made the headlines.

The Psychology of the Hoax – Part 3: The Wave

The futility of mandatory vaccination

We MUST revolt as a people

wpDiscuz
4
0
I'd love to know what you think about this. Please leave a comment.x
()
x
| Reply
Dear readers