This message is from Robert F Kennedy Jr on Telegram. The question is, is this true? 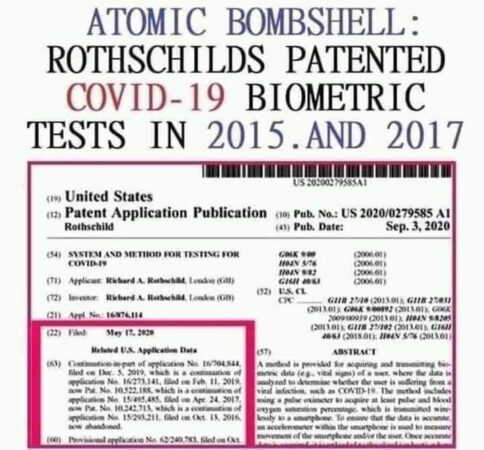 If true, it would imply that Richard A Rothschild already knew in 2015 that we would need a SARS-CoV 2020 test kit by 19.

The photo does not make much clear and if you enlarge it, the year 2015 is not mentioned once.

There is also a “Fact-check” article from Reuters news agency in which this is completely undermined.

I myself have tried to request the original patent application from 2015 from Richard A Rothschild on the website of the American Patent Bureau. The patent office that was open to the public a year ago is now closed like an oyster.

But luckily we have the internet and this evidence is stored and publicly available.

The article below was written by; Silviu “Silview” Costinescu

It is beyond dispute, as the information comes from official patent registrations in the Netherlands and the US. And we have all the documentation

UPDATE: Reuters took charge of harm reduction for this article and published a defamation piece about us disguised as “fact checking”.
We've checked their fact-check here sentence by sentence.

In the link below you will find the Dutch website in which everything is fully explained and maybe you will come to the conclusion together with me that it is true.

Apart from this article in the link, American websites have already paid a lot of attention to this case by people who were directly associated with the patent office from an independent legal point of view.

Share. Facebook Twitter Pinterest LinkedIn Tumblr Email
Previous ArticleIn the eye of the storm
Next Article MEP Cristian Terheș: “Are you serious? Are you really saying that people are not being forced to vaccinate?”
Subscribe now
Login
3 comments
Most Voted
Newest Oldest
Inline feedback
See all comments

Between Autonomy and Compliance

US and Russia witch hunt opened for Elon Musk

wpDiscuz
3
0
I'd love to know what you think about this. Please leave a comment.x
()
x
| Reply