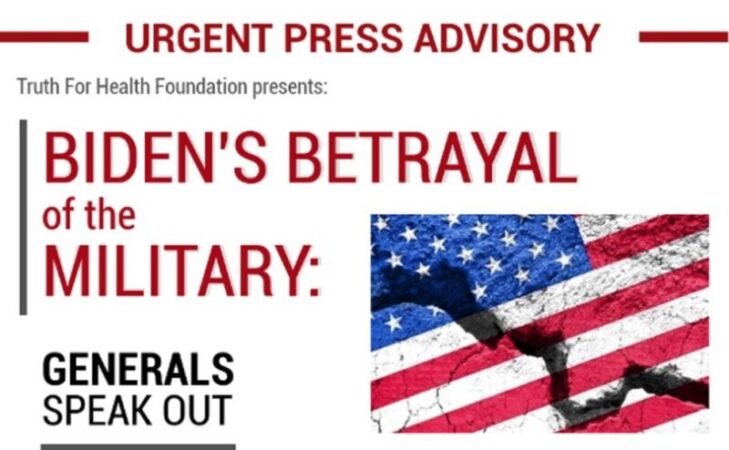 Virtual press conference with retired generals will expose Biden's 'deliberate' destruction of the US military.

"Biden's betrayal of our military with unlawful orders to vaccinate all military personnel with the experimental EUA COVID injection weakens our military, endangers national security and endangers every American."

TUCSON, Arizona (Truth for Health) — President Joe Biden is using COVID to bring about a systematic destruction of America's military and national security by purging the most experienced and well-trained personnel and replacing them with "woke" indoctrinated far-lefts who are the woke ideology for God, corps, duty, honor and country, according to former generals, senior officers, military rights attorneys, military and civilian physicians and America's leading health watchdog, Truth for Health Foundation.

“Biden's betrayal of our military with unlawful orders for all service members to be vaccinated with the experimental EUA COVID injection weakens our military, endangers national security and endangers every American,” said Elizabeth Lee Vliet, MD, president and CEO of Truth for Health Foundation, a public charity dedicated to defending medical truth and individual medical freedom.

The video lasts 2 hours and 40 minutes

This alarming betrayal of our national defense has made Dr. Vliet and the Truth for Health Foundation to convene a press conference on June 14, National American Flag Day. The press conference, titled “Biden's Betrayal: Destroying our Military,” will be livestreamed on LifeSiteNews and multiple other live streaming platforms at 12.00:XNUMX PM Eastern Time. (see video above)

Keynote speakers include General Thomas McInerney, General Paul Vallely, Lt. Gen. Rod Bishop, Lt. Col. Peter C. Chambers, DO, attorneys Todd Callender and Mike Rose. Biden's attack on the military has resulted in deaths, injuries and medical damage/disability from the vaccinations, plus soldiers being discharged from the military, many without due process, with dire consequences for America.

Military leaders and lawyers will reveal how members of the military are being persecuted under the cloak of military secrecy and "shadow policies" for objecting to the experimental COVID vaccinations, for filing religious waivers, for filing medical waivers and for refusing this unlawful order. In addition, senior officers will reveal how Biden is giving in to the globalist agenda by replacing America's veteran soldiers with woke indoctrinated new hires, seriously affecting US military preparedness and national security.

In all branches of our military, thousands of highly experienced exemplary servicemen have been harassed, persecuted, and charged with career terminations for refusing to take an experimental EUA vaccine. Thousands of other service workers have been injured by the vaccine so that they can no longer function. The Foundation provides our military with a platform to expose the corruption of military law and the dangers to our national security when the lives of our volunteers are endangered by dangerous, politically driven policies imposed from above by DoD.

“We are losing experienced and well-trained military personnel, reflecting billions in lost tax dollars and dramatically reduced military readiness, such as pilots unable to fly or complete training, and troops too sick to perform duties,” said Vliet. “This has dramatically weakened national security at a time of mounting tensions worldwide – serving the agendas of China and the globalists to 'take America out of the fray; and take power worldwide.”

The sons and daughters of America who stood up to defend our Constitution and our freedom are paying a heavy price with their own constitutional rights trampled by the supreme commanders who took an oath to defend our Constitution. If our military is being abused to this extent and forced out of the military simply for applying for religious or medical waivers for an experimental vaccine, who will stand in the gap and defend your rights? Our military members defend us. They deserve our support to defend them now from medical tyranny by their own command. We must now resist tyranny and protect the freedoms bestowed by our Creator and enshrined in America's founding documents.

Reiner Fuellmich guest at the launch of 'Nuremberg 2.0' in Poland People are in a cramped situation and…

Change in DNA in vaccinees nevertheless

Unheard of practices from biolabs?

Germany already under the spell of winter

wpDiscuz
4
0
I'd love to know what you think about this. Please leave a comment.x
()
x
| Reply