A 42-year-old man has been charged with murder, attempted murder and terrorist acts after the shooting at several nightclubs in central Oslo last Saturday night.

Two people were killed, ten were seriously injured and eleven were slightly injured. A horrific result.

One consolation is that none of the injured are in immediate life-threatening condition, the police reported at a press conference on Saturday morning. (source) The man had several previous convictions, including carrying an illegal knife in a public place.

The police have seized several weapons, including an automatic weapon. The man was not questioned by police on Saturday morning.

"We continue to work to uncover his motives," said prosecutor Christian Hatlo at the press conference.  (source)

Norway is known for not even carrying a weapon with many police officers. (source)

The gun law, oddly enough, even allows the purchase of machine guns. (source)

The man, who has been arrested, is a 42-year-old Norwegian citizen of Iranian background and already known to the police and the Police Security Service (PST).

What we have understood so far is that he came around the corner from the courthouse, took a gun from his bag and started shooting from the outside at 01:15 am at the gay bar Per, located there.

Then he walked down Rosenkrantz Street to the gay bar London Pub and started shooting at the people in the bar. At 01:19, the police overpowered the man. 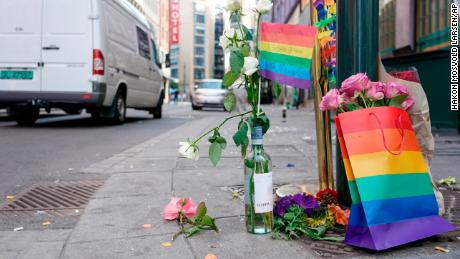 The victims fell inside and outside the London Pub, a long-standing center of Oslo's LGBTQ scene.

Several witnesses told NTB that Pride-celebrating pub guests threw themselves to the ground in panic when they heard the sound of gunshots. (source)

We have not yet been able to find the exact timeline. There is no official information at the time of writing.

Due to the shooting, Saturday's Pride Parade and other events related to Oslo Pride have been cancelled.

Oslo Pride released the information on Saturday morning, stating that they are canceling the events following advice and clear recommendations from the police.

“Now we will follow the recommendations of the police and take care of each other. Our thoughts and love go out to relatives (of the victims), the injured and others affected. We will soon be proud and visible again.” said Inger Kristin Haugsevje, leader of the Oslo Pride and leader of FRI (the Association for Gender and Sexuality Diversity) Inge Alexander Gjestvang in a press release.

It just goes to show that the hysteria of the left to disarm ordinary good citizens will not help against these mass shootings and will increase crime.

The criminal gangs in the big cities do not obey gun laws and it is made much easier for them. When

It's been a bad week for Democrats. While politicians have been pushing for red flag laws to disarm people who Democrats don't like, the Supreme Court seemed to immediately stop this by ruling that the 2nd Amendment is clear about the right of every American over the age of 18. carry a weapon in self-defense.

The traditional reasons for giving this right to citizens is that citizens can defend themselves against this kind of mass shooting, house robbery or when the government turns against you. You may defend yourself and your family.

An update and a thank you to our readers: More common sense!

Between Autonomy and Compliance