Hillary Clinton did it

Hillary Clinton did it

Her 2016 campaign manager says she has approved a plan to falsely accuse Trump of collaborating with Russia and spread it through a media reporter.

The Russia-Trump collusion story from 2016 and beyond was a dirty trick, and now we know it came from the top: candidate Hillary Rodham Clinton† That was the testimony of Clinton campaign manager Robby Mook in federal court Friday, and while this news is hardly a surprise, finding her fingerprints on the political murder weapon is still exciting.

Mr Mook testified as a witness in the special counsel's trial John Durham Tegen Michael Sussmann, the attorney accused of lying to the FBI. In September 2016, Mr. Sussmann claims a secret Trump connection to Russia's Alfa Bank to the FBI and said he was not acting on behalf of a client. Prosecutors say he worked for the Clinton campaign.

The Wall Street Journal is a very serious media in America.

John Durham is a special counsel, you can see him here on the right in the picture, he cannot be fired or replaced, he has unlimited powers of attorney and he has a very large team of lawyers who have been 2017 conducting research and collecting evidence. 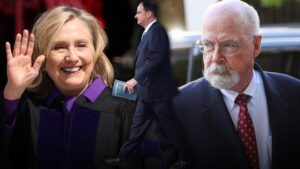 This trial of Michael Sussmann is taking place in Washington under a Democrat-appointed judge. Additional lawsuits have been announced in other states that will soon be taking on John Durham's team.

If you click on the link to WSJ above, there is also a movie that explains everything in more detail. Was it the FBI that stole Trump's election?

Excess mortality in the Netherlands.

8 CONSTITUTION REVISIONS AND NO ONE SEEING

wpDiscuz
13
0
I'd love to know what you think about this. Please leave a comment.x
()
x
| Reply
Dear readers