Effective and safe, the vaccination damage dashboard is back! 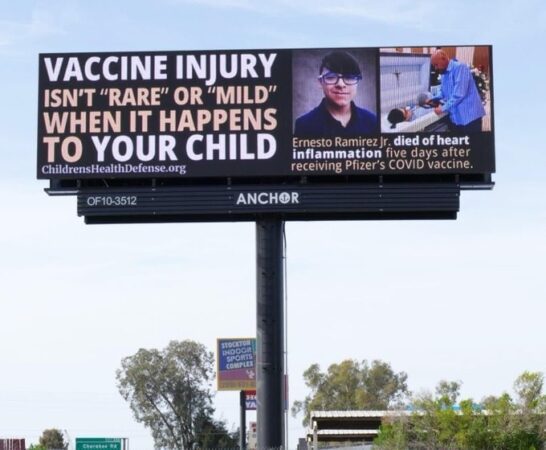 As you are used to from us, we always publish the vaccination damage dashboard when new information is received.

The information that the government 'forgot' to mention on their corona dashboard.

My estimate, after thorough research, is that EudraVigilance (part of the European Medicines Agency EMA) represents at most 10% of the actual damage suffered. In America, university research was carried out into the number of reports to VAERS, the American registry, and it turned out that only 1% of side effects and deaths were reported. Well, that research dated back to long before the corona hoax and poison injection campaign. My estimation is that now more people are alert with the poison syringes. But it certainly does not exceed 10% of the actual damage. In previous articles by myself and Marcel van Tol, this has been clearly stated.

But yes, even if we only look at the registered spray damage, we can safely accuse everyone involved in the poison spray strategy and campaign of premeditated mass murder. 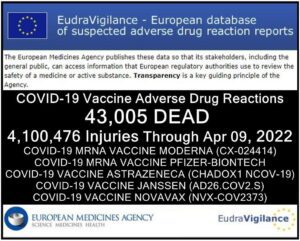 43 thousand registered deaths and 4,1 million injuries, half of which were serious.

And the 5 to 11 year old children are also doing great. Here are the registrations from the US: 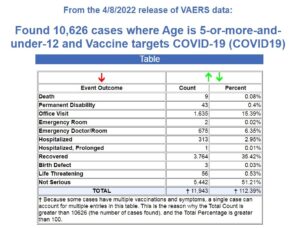 It's all super safe and very necessary. It will be your baby..... 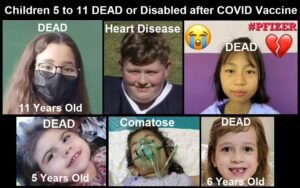 The premeditation is already apparent in Pfizer's coverage of their Phase 3 investigations, which the Supreme Court ordered not to be kept under wraps for 75 years (as Pfizer agreed with the CDC and the FDA). This documentation showed that the effectiveness of the syringes was not measurable and that the lethality was as much as 3%. Pfizer has tweaked its poison mixture to the point that several versions are in circulation, otherwise the high death rate would have quickly halted the spray campaign. There is a good chance that you have only had one NaCl injection so far. But that won't always be the case.

The documents released to date cover all syringe damage observations from Pfizer's clinical trials. No less than 8 pages full of misery. In their own documents!!! Those documents they wanted to keep under wraps

Pfizer's partner in crime openly admits in its 2021 annual report that the syringes do not work. BioNTech's recently published annual report states, among other things:

“We may not be able to demonstrate sufficient efficacy and safety of our COVID-19 vaccine and/or variant-specific product candidates to obtain continued regulatory approval in the United States, United Kingdom, European Union or other countries where the vaccine has been approved for emergency use or has received a conditional trade approval…During our clinical trials or even after receiving regulatory approval, serious adverse events may occur that could delay or terminate clinical trials and delay or prevent regulatory approval or market acceptance of our product candidates.”

They further write that safety and durability cannot be proven based on the test results so far. This means that there is no safety and no efficacy of these poison syringes. A statement that has been made very often on CSTV and is now admitted on paper by the criminals themselves. These syringes can only cause damage and have nothing, absolutely nothing to do with your health.

The most absurd explanations are put forward for the many deaths due to heart and blood problems. Everything but the syringe can be blamed. This explanation about why so many athletes with heart problems suddenly die or are discharged is so absurd, there are no words anymore: 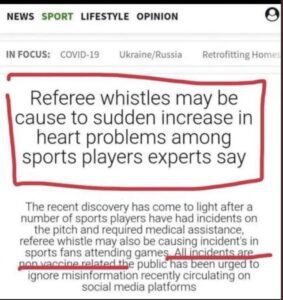 The referee's whistle. All those deaths could well be because of that, according to experts...

Safe and effective can at best apply from the perspective of bill gates and klaus sschwab: the extermination of a large part of the population. No matter how hard they insist on it, dear people, no matter how big the sanctions become, please never take such a poison syringe in your body (again).

We are dealing here with the biggest and most ruthless criminals to ever walk the world. This is worse than hitler, mao, pol pot and the whole other list of genocidal criminals through the ages put together. The guys behind this, fauchi, sschab, gates, rockefellers, soros and their NCOs: all wef members, these guys are only out to destroy a large part of humanity. Soon the European spraying obligation will come and soon all authority will also be transferred to gavi and who of bill gates. They will rule and I assure you that the spraying obligation will be introduced worldwide.

They control the main stream media and thus the 'opinion' of roughly 90% of the population that has been completely brainwashed. So this fall, most people will be queuing again for the next shot. 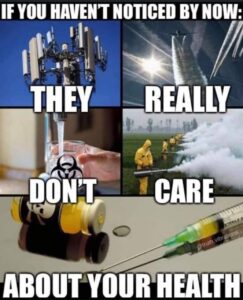 I'm taking a break for a few days. I still have a lot of topics on my list to write about but yes, so much ado, so little time….

But I'll give a few predictions and 'things to do':

Macron is going to win the election anyway. They'll take care of that. macron is a loyal wef vassal and Marine LePen is not, so that is as clear as a log.

Marcel van Tol reported extensively on CSTV about the false registration of the death of his father, who had been a heart patient for many years. When his father suddenly died one day, the medical examiner wrote casually (no pun intended) that his father had been ill for 4 days due to covid and had died of it. The medical disciplinary committee has ruled in this case, you are going to fall off your chair. I will come back soon, at Marcel's request.

The war in Ukraine, which is being fancied by the US and Europe, is entering a very dangerous phase. Putin is forced to go much harder at it. So far he hasn't used a 'shock and awe' tactic because he wanted to save the country and the people as much as possible. But the West now leaves him no other choice.

Enjoy the spring and summer folks, in the fall we will really experience what the self-proclaimed dictators are planning and what they are going to do to us.

Churchill once said, "Democracy is not a good form of government, but I don't know any better." He…

The WEF takes over.

CDA and the D for democracy

wpDiscuz
10
0
I'd love to know what you think about this. Please leave a comment.x
()
x
| Reply