Vaccination is deadlier than abortion pill 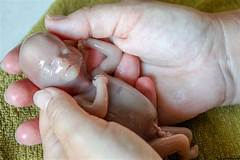 Pediatrician: "The Covid vaccination is more deadly for the fetus than the abortion pill".

Last January, an article appeared in the New England Journal of Medicine stating that pregnant women are not at increased risk of miscarriage after being vaccinated against the corona virus.

Many women who are already in the third trimester of pregnancy participated in the study. The researchers then looked at whether any of them were in the eerste trimester had a miscarriage. “Of course that's absurd,” says pediatrician Elizabeth Mumper.

If you exclude this group, you get a percentage of 82 percent, she said at Friday's roundtable on CHD.tv. 82 percent of women had a miscarriage after the corona vaccination.

Mumper pointed out that Pfizer documents also show that 80 to 82 percent of pregnant women miscarried in the eerste trimester after vaccination.

That makes the corona vaccine more deadly than an abortion pill. A pregnant woman in the first trimester has a greater chance of miscarriage or stillbirth after a corona injection than after an abortion pill, the pediatrician emphasized.

The doctors pointed out the error to the magazine, but the study has been in the medical literature for more than a year now. Vaccination is still recommended for pregnant women, Mumper sighed.

In the context of objectivity, in my view, it is important to look at different sides…

Freedom of Speech and Censorship – continued

The Going Direct Reset: Part 3 – Signs of an accelerated roll-out of a similar social credit system in the Netherlands and around the world

THE BANKRUPTCY OF DEMOCRACY – Part 5

wpDiscuz
9
0
I'd love to know what you think about this. Please leave a comment.x
()
x
| Reply
Dear readers