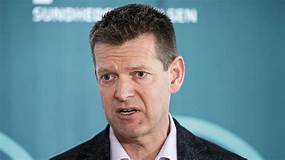 We have become wiser and would not do the same today, says Søren Brostrøm.

With the knowledge we have now, it did not help us much last year to have children vaccinated against the corona virus.
The director of the Danish RIVM, Søren Brostrøm, acknowledged this on Wednesday at the presentation of the future corona strategy.

As of mid-July last year, the first 12-15-year-old children in Denmark were invited to receive a vaccine against the coronavirus. In November, the 5-11-year-olds were also advised to get vaccinated against the virus.

At the time, it was said that the vaccinations were not mainly for the children themselves, but to control the epidemic in Denmark.

When Søren Brostrøm presented 'Go' Evening Live' on TV 2 on Wednesday evening, he was asked if it was a mistake to vaccinate children.
– With what we know today: yes. With what we knew then: no, was the answer.
At the press conference earlier Wednesday, Søren Brostrøm also said that it was clear in the spring that the vaccines were not particularly preventive, but rather prevented serious illness, and that therefore we now have to “learn more”:
– In hindsight, expanding the childhood vaccination program did not help us much when it comes to epidemic control. But that's in hindsight.

An “unjustified hard pressure on parents”

Christine Stabell Benn, clinical professor at the University of Southern Denmark, has long been critical of the corona vaccination of children. She had no doubts that the recommendation was unnecessary, even when Denmark went it alone and recommended it to the 12-15 age group last summer.
– We had some vaccines with a very unknown side effect profile, and at the same time we had some children who had nothing to gain from vaccination, she tells TV 2.

Because the National Health Council itself has indicated that there were many uncertainties about whether it was the right decision, it also believes that the board should have adjusted the strength of their campaign. She calls on the board to reconsider whether there really was a reason to "put so much pressure on the parents" to have the children vaccinated:

– In addition, children were made responsible for the health of their parents and grandparents. I think that's unreasonable, says Christine Stabell Benn and continues:
– I think there are still a lot of parents who say, “What was this all about?” There are many parents who have really gone to the trouble of dragging their children to the vaccination center, but why?

A lack of confidence
In Dr. Bolette Friderichss' practice, she met many parents who did not understand that their child should "take a shot before the others" and be vaccinated.

Now, nearly a year after the recommendations on vaccines for children, she is particularly concerned that the parents of nearly 60 percent of children in the affected age groups have declined the authorities' offer.
– One has to imagine that the 60 percent has been in a great dilemma. And I might be concerned whether the families have now had a lack of trust in the authorities, which we otherwise have a lot of confidence in in Denmark, says Bolette Friderichsen, who is also president of the Danish Society of General Medicine.
She therefore also believes that it should be included in the plan that we can achieve natural immunity through infection, because that kind of immunity "takes longer" and carries a low risk for healthy children.

Allan Randrup Thomsen, professor of experimental virology at the University of Copenhagen, supports the new announcement from the Danish RIVM, saying that "it probably didn't make much sense" to have the youngest vaccinated, with the knowledge we have today.
– But what we have to hold on to is that no damage has been caused by it. It was more a misinterpretation of the situation at the time, which we will discuss among professionals for a long time, he tells TV 2.

In 'Go 'aften Live', Søren Brostrøm came with a message to the parents who let their children get the corona vaccine.

– I want to look all the parents of the children who have their child vaccinated in the eye and say: “You did the right thing and thank you for listening”. But at the same time – and this is the most important thing to maintain confidence – I must admit and say that we have become wiser and that we would not do the same today. And we won't do that in the future, Brostrøm said.

At Wednesday's press conference, it was announced that only Danes over 50 and particularly vulnerable will be invited for a fourth vaccination

The futility of mandatory vaccination

Eurovision Song Contest: And the winner is…

Weird, or just accept it as the new normal?

Our shop will be closed within 2 days

wpDiscuz
7
0
I'd love to know what you think about this. Please leave a comment.x
()
x
| Reply